Are all employee opinions allowed at work?

Are any and all employee opinions allowed at work? If you have been reading the newspaper or social media over the past few days you have seen an article about an employee at Google, who published a manifesto about the unsuitability of women to the IT workplace. He cited biological differences that cause women to be “directed toward feelings and aesthetics rather than ideas,” and to “have a stronger interest in people rather than things (empathizing vs. systemizing)”. The writer, in a 10-page essay, then drew conclusions about women’s difficulties negotiating for raises, speaking up, and leading. He talked about their “neuroticism (higher anxiety, lower stress tolerance)”.

His opinions may or may not make your hair stand on end in outrage. But here’s the question: should unpopular opinions like his allowed to be expressed in the workplace? This employee was fired by Google. His published opinion piece was in direct conflict with Google’s corporate values of diversity and inclusiveness.

Think what you are going to think

Management cannot control what employees think.  In many cases, attitudes are so far below the conscious level that employees don’t even know what their own habits of thought are until they are faced with a situation that uncovers them. Apparently this manifesto picked open a wound in the industry, because the comments and follow-on posts were overwhelming in number.

In the case of this tech employee gone rogue, it is possible and even likely that there are other employees at Google who share the writer’s opinions. He is “diverse” from the company line in his point of view. An espoused benefit of diversity and inclusiveness is diversity in perspective, which protects the company against blind spots and adds creativity through the variety of unique experiences and outlooks.  So this guy has the right to his thoughts, whether you agree with them or not. Right? Right?

Keep your opinions to yourself 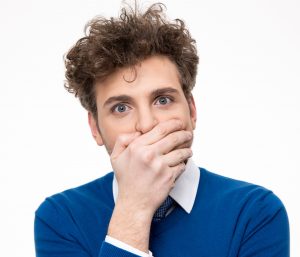 The problem with opinions and attitudes is that they start to leak out over time, as they did with this writer. Discriminatory attitudes are not all about women – he could as easily have written a treatise about older workers, physically disabled workers, or about any minority group you can think of. As soon as “Manifesto Man” crossed the line from thinking into behavior he violated Google’s corporate values. His statements were inflammatory and offensive to many, but the point was that he flagrantly violated known corporate values when he advocated for his views in such a public way.

After this public display, how could Google in good conscience place this guy on a work team with any female colleague? Whether you agree with his “biological causes for female behavior” or not, it should be obvious that if you were to require a woman employee to collaborate with him, you could be cited as an accomplice in creating a hostile work environment! In other words, if you wouldn’t stop him you could wind up being a co-defendant in court.

The need for training, dialogue to support core values

Is free speech dead? Are employees not allowed to express unpopular points of view? This instance ripped from the headlines demonstrates the need for companies to take actions beyond writing their core values down if they truly want to live the values their internal slogans espouse. Some of the conversations around core values, inclusiveness and diversity are not comfortable, but an HR-facilitated process of ongoing diversity programming can help to discuss conflicts, discomfort, assumptions, etc. in a safe space. Hiding from them or pretending they don’t exist doesn’t make them go away.

As company leaders, modeling appropriate behavior and holding individuals accountable for inclusive speech and behavior are critical cultural responsibilities. You can’t manage attitudes or change habits of thought. That ball is in their court. You can only manage behavior, and in doing so demonstrate to your entire employee base where the boundaries are located. If you tolerate behavior that is outside the behavioral standard you show your employees that the standard doesn’t really exist. And if you are inconsistent in the application of behavioral limits and consequences from one situation to another, you run the risk of a discrimination claim of a different sort.