OSHA Violations and The Fines You Can Expect 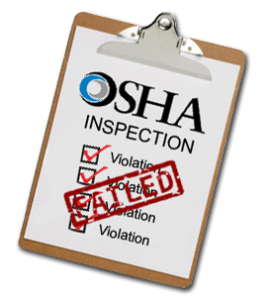 Willful Violation – Requires intentional disregard for the act or plain indifference to employee safety and the law. The employer either knows that they are committing a violation, or they are aware that a hazardous condition existed and made no reasonable effort to eliminate it. Penalties range from $5000- $70,000. If an act results in death, fines run from $250-$750k, plus six months in jail.

Serious Violation – This violation requires “substantial probability that death or serious physical harm could result from a condition which exists, or from one or more practices, means, methods, operations, or processes which have been adopted or are in use, in such place of employment unless the employer did not, and could not with the exercise of reasonable diligence, know of the presence of the violation.” OSHA may propose a penalty of up to $7,000 for each violation.

Other-Than-Serious- Requires direct and immediate relationship to the safety and health of employees, but probably would not cause death or serious physical harm. OSHA may impose a penalty of up to $7,000 for each violation.

Failure to Abate- This violation occurs when a previously cited violation has not been brought to compliance. Penalty can be up to $7000 for each day the violation continues beyond the cited abatement date.

Repeated- As suggested, this requires a previous citation, “within the last five years, for the same or a substantially similar condition or hazard and the citation has become a final order of the Occupational Safety and Health Review Commission (OSHRC). A citation may become a final order by operation of law when an employer does not contest the citation, or pursuant to court decision or settlement. “Repeated violations can bring a civil penalty of up to $70,000 for each violation.